Cornish Village Group in the black

An object lesson for Ireland:

A community group established in the Cornish village of Ladock in the Autumn of 2010 has announced that it has already generated £20,000 in profits from its green energy initiatives. 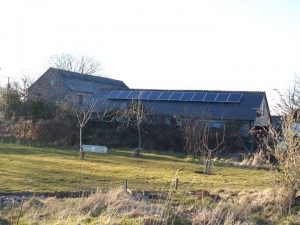 The group, Low Carbon Ladock installed a range of energy systems from solar panels and biomass boilers to ground and air-source heat systems in various locations of the village including family homes. They have generated their profits from national grid feed-in tariffs, which are paid to UK producers of renewable energy.

A spokesman for the community group says that they are now examining the feasibility of a hydro-electric generation project.

The villagers say that they will use the income generated from their various projects to fund local community initiatives such as playing fields, road improvements and, crucially, further investment in renewable energy schemes.

The Chairperson of the group, Mr Chris Jones said that they were also working towards building a wind turbine that could earn the group £25,000 a year.

While the UK government has proposed changes to the subsidising of the feed-in tariff payments made to micro-renewables producers, reducing them by 50%, Mr Jones claimed that this would not have a detrimental affect on Low Carbon Ladock’s profits or viability: “The cost of solar energy is coming down, so the ratio of what you spend and earn is quite similar.”

Responding to Mr Jones’ announcement, Pat Gill of Irish Energy Co-ops stated that “despite the fact that Ireland does not have generous feed in tariff’s, community projects such as that in Cornwall are still very possible in the Republic. We would have to replace the greater UK subsidy increased innovation and efficiencies, but these are still exactly the kind of  returns an Irish Co-operative could reasonably expect to achieve”