An extractive model dressed up in sustainability clothes 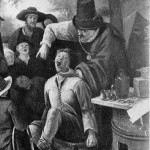 Export failure could offer new opportunities: time to dust off that program for government commitment to community ownership of renewable energy.

The breakdown of negotiations between Ireland and the UK on a deal which would facilitate the export of wind energy through an inter-connector was widely predicted. The need for the UK to support the sale price of imported energy was  never really a runner. The level of opposition of the host communities made the project unlikely from the start. The cost of interconnection which had to be built into the business models of the projects proved to be a major stumbling block.

The most pressing reason for the mothballing of the highly ambitious plan may be political. The UK Tories have reverted to their historic negativity towards renewables.  Mainstream and Element Power’s clumsiness when it came to gaining community acceptance has created headaches for Labour and Fine Gael in the run-up to local and EP elections. A hornet’s nest of opposition has been stirred up – even pro-renewables groups

However, there may have actually been fundamental problems with the economics of the projects. All reports quote the size of the inter-connector required as being in the order of 5GW.  Since the existing 5MW East-West inter-connector (2009-2012) cost €500m, the new inter-connector would likely come in at about €5bn. That’s a pretty hefty connection fee for the project.

On top of that the 2,600 2 MW turbines would be expected to cost  somewhere in the region of €5.5bn. That’s a whopping €10.5bn of investment on an inter-jurisdictional project that’s really had no precedent. The payback on the project, assuming a generous wholesale price of power of  €70/MWh (output would be approx 11,500 GWh/yr) could be in the region of 10-12 years. I don’t know if that represents a sound investment.

So for political and financial reasons, the mega-export-project will not proceed in the medium term. What lessons do we need to learn from the saga?

Don’t get carried away with grandiose projects: the scale of the wind for export schemes were too big an investment risk for an untested business model. There is still room for a 1GW export scheme which will definitively prove the viability of the proposals. The Bord na Móna arm of the scheme could still be pursued.

Build in the community acceptance from the beginning. This should include the sort of equity ownership that ECI sees as rightfully at the heart of Ireland’s renewables strategy.

Stop seeing the energy sector through 20th century eyes. The simplistic business model on which these massive-scale schemes were based was simply extractionism dressed up in sustainability clothes. Corporations came to town and traded secretively with local elites. They appeared to try to placate political groups with promises of increased tax revenue and highly speculative jobs figures. They received overseas funding which guaranteed an export of profit as well as product. They leaned on the public sector for price supports. Their actions raised the specter of a compromised landscape and a divided community with only short term construction benefits to show for it all. This is highly reminiscent of the methods of big-oil in the 20th century.

Fortunately, an opportunity  still exists in the Midlands of Ireland, indeed the whole of Ireland.  A renewable energy sector deploying a diversity of technologies – for example cost effective wind and jobs rich biomass – which are embedded in the community through shared ownership is still very achievable. Intermittancy can be mitigated by a more balanced energy consumption within a more distributed energy system, it can also be used to convert either locally or nationally to a carbon free transport system. Dividends from the sector can be embedded in the local economy: in jobs, in taxing profits, in re-investment into the local commercial sector.

The wind to export schemes have failed because they were predicated on an outdated business model. Now that this is the case, it is hoped that distributed systems will be re-evaluated by both the business sector and the state: time to dust off that program for government commitment to community ownership of renewable energy.