It’s being reported that a drop in the price of solar panels in developing countries has led solar power generation to become the most efficient solution to those countries’ growing electricity demands.

A study published by Bloomberg New Energy Finance has shown that in India there was a 50 percent reduction in the cost of solar panels last year. This means that as a solution to India’s increasing energy demand solar technology offers better value to that of traditional carbon-based generation methods. 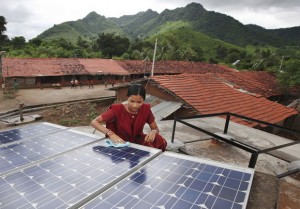 Effectively this comes about due to the lack of a nationwide electricity grid system and the use of diesel generators to micro-generate electricity on a local level. Factories and other services such as schools and hospitals as well as homes are spread out across the country unconnected to a national rid and so have been getting their electricity from diesel generators that  are criticised as both dangerous and polluting. Added now to that list of negatives is: expensive.

In India solar generated electricity now costs 8.78 rupees per kilowatt hour (13c) while deisel generated electricity costs twice as much at 17 rupees per kilowatt hour (26c). This favourable price difference is down to the sudden drop in the costs of the solar panels rather than any improvements in efficiency in the panels. Effectively this is an economy of scale issue: with more panels produced the costs of production drop as does the price of installation, leading to improvements to the bottom line costs of electricity. Combined with improvements in local air quality, reduction of overall carbon emissions and an improvement in energy self sufficiency (India is the fifth largest net oil/diesel importer in the world) this is surely fantastic news for the global movement towards renewables.

India’s problems of energy distribution are mirrored throughout the developing world where national grids are usually sparse there are 260 million rural households in the developing world without access to electricity – thus the price balance can be said globally to be tipping against diesel and towards solar.

This optimism this good news story is tempered by the facts that coal fire  generated electricity supplied through the grid is still cheaper than solar and the initial installation costs of the panels are higher than those of diesel generators. However with further price reduction in panels on the way solar power will become cheaper still on a par even with coal by 2015. Inventive credit pooling schemes, co-operatives and the application of micro-banking initiatives should also  provide a means of meeting the higher upfront  costs.