Seafuel Report into Hydrogen Applications on Árainn, Madeira and Tenerife

The SEAFUEL INTERREG research program  seeks to show that it is feasible and sustainable to power local transportation networks on islands using hydrogen produced using renewable energy. ECI and Comharchumann Fuinnimh Oiléain Árainn Teo produced this report on the pre-trial transport context of the three case study islands: Árainn, Co Galway, Madeira, Portugal, and Tenerife, Spain. the report assesses the transport network on each of the islands exploring which elements are open to benefiting from switching to sustainable and locally produced hydrogen to power fuel cells.

Full report in a downloadable pdf is here: 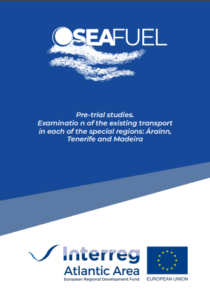 This paper conducts a survey of three Islands in the European Union with a view to assessing their
suitability for H2 deployment in the transport sector. We look at issues of geography, population
and socio-economic in how the affect transport as well as the availability of renewable energy.
We also examine the energy use of the islands focusing on that used in the transport sector to
determine relevant drivers or obstacles to H2 deployment.

The three islands studied are Tenerife (Spain), Madeira (Portugal) and Árainn (Ireland). The research
was conducted by partners in the SEAFUEL research project which is funded by the European
Commission through INTERREG. Research on Tenerife was conduced by Instituto Tecnológico
y de Energías Renovables, ITER, on Madeira by Agência Regional da Energia e Ambiente da
Região Autónoma da Madeira, AREAM, and on Árainn by Comharchumann Fuinnimh Oileáin
Árainn Teo, CFOAT.

This paper is the first of a series which will look at H2 in transport in these three island case study
areas. Further research wil examine energy system requirements for H2 deployment as well as
public acceptance assessments. We will also relate the direct experience of the deployment of
H2 vehicles on Tenerife to the other islands.

The paper finds that H2 deployment is most likely to be determined by issues of geography
and population where daily commute distances below 100km will not act as an incentive fro
private car owners or vehicle fleet owners to choose Fuel Cell Vehicle (FCVs) over Electric Vehicles
(EVs). The existence of fleets of vehicles on larger islands will likely provide opportunities for FCV
adoption.

Maritime and Air transport opportunities are discussed, but it felt that for each of these islands
their open ocean Atlantic location will require a maturation of maritime H2 technology. Similarly
the authors recommend the completion of studies examining H2 in small passenger air transport
before committing to additional research into this sector.