These are energy sources that can be turned on and off to suit the power distributor or grid operators needs. The time it takes for the energy to be discharged can vary, but the common factor is that they are predictable and controllable. Typically wind and solar are not on their own dispatchable as they are dependent upon natural conditions (is there enough wind, enough light?) which means that can not be called upon at all times.

Many fossil fuel power generators are however dispatchable. The most reliable and widely used of these in Ireland is Natural Gas. A Gas Generator can typically be turned on and dispatched within minutes.

The usefulness of dispatchable energy sources is  in the fact that they can be used when there is a demand for energy and turned off when not required.

Why we need to have dispatchable energy?

There are fairly predictable cycles in energy demands in Ireland. These operate over daily and seasonal cycles. There is less demand for energy in summer than in winter in Ireland. We have a greater need for heating and lighting in the short, cooler winter days. There is no great demand for air-conditioning here in summer. Student and thus workers’ holidays mean that there is less industrial output.

This graph shops the characteristics of summer and winter electricity demand in Ireland. In summer there is a rapid increase in demand from a base-load low of 2200MW from 6 am onwards to 3500MW throughout the working day. This remains relatively consistent from about 8.30 am onwards with a slightly higher peak demand of about 3650MW at 6pm (dinner time). The demand then tails off over the evening and into the night. The winter demand is quite different to that in the summer with the pattern of a markedly higher peak use of electricity at 6pm due to sudden increased use of street and domestic lighting and electrical cooking appliances.

There are also some slightly less predictable but well known variances in power demand in Ireland. The surge in demand during ad breaks in the Late Late Show in the 1970’s and 80’s or during the Eurovision Song Contest are well known in energy generation folklore. It is said that specific on demand energy generation projects were built to cope with these and other spikes in electricity demand.

We also need dispatchable power to smooth out variance in the forms of renewable energy mentioned above (solar and wind). If there is not enough wind we may need to ramp up the energy from other sources of generation. The same is true if there is too much wind.

Wind turbines are designed to operate within certain levels of wind speed. Too little wind, the turbine can’t turn; too much wind and the turbine must cut out altogether. While these are infrequent events, the centrality of electricity to our lives means that they must be catered for and so there is a need for adequate dispatchable power if required. This dispatchable power can itself come from renewable sources.

These can be of varying speeds, varying energy sources and varying supplier types.

Capacitor’s can store electricity directly and dispatch it in milliseconds. While other energy storage systems convert the energy into thermal, chemical or mechanical forms which can be re-converted into electricity at a later stage. This conversion and reconversion process always results in some loss of power (efficiency). Capacitors on the other hand store the actual electric difference. This has two benefits: there is almost no loss of power through inefficiencies, and the power can be discharged to all intents and purposes instantly.

Capacitors are currently widely used in power generation and distribution as a means of smoothing out small variances or ‘hum’ in the grid so that sensitive energy using equipment receives a smooth flow of electricity.

Traditionally capacitors are limited by two constraints: a lower energy density and expense. The first means that capacitors are good at discharging their electricity extremely quickly but over a short time, the second that they are more expensive than battery storage of electricity to a sudden discharge of a large amount of electricity and so are not suited to long term storage. However recent developments in capacitor technology has led to claims  that they will have significant grid-level applications – though this is where they are combined with chemical bulk energy storage (below).

Some hydroelectric systems can be dispatched in seconds. For instance Turlough Hil, County Wicklow, is a hydroelectric system which is capable of achieving maximum output of 292MW within sixteen seconds, a thermal plant may take more than 6 hours to achieve maximum.

Natural gas turbines can generally be ramped up from stop to maximum in minutes. However NLG systems usually ‘idle’ when not required to generate power to the grid keeping their turbines operationally spinning but not using much fuel. This enables them to conserve fuel but maintain a readiness to dispatch at short notice (less than a minute).

Much slower systems like biomass or coal plants can take hours to vary their output significantly. This is because the rely on reservoirs of heat within their boilers to generate the steam which drives the turbines. Heating up or cooling down a furnace naturally can take quite some time but naturally improvements in technology mean that thermal plants have become more flexible. However, as this report shows, there is still an essential incompatibility between traditional thermal plants which operate consistently at between 60% and 90% of their capacity and variable renewables such as wind. There is in effect no good reason why a geographical spread and technological mix of renewable technologies cannot provide base-load electricity, even if in the intermediate stage fast response gas turbines are used to meet changing dispatch demands.

This is the generation of electricity using turbines which are driven by the gravitational force of water leaving a reservoir. There is a combined 508MW capacity in ESB-owned hydro-electric systems (this includes the 292MW 6hr capacity that is generated in Turlough Hill) There are also smaller hydro-schemes also which between them approximately generate 15MW bringing the total of hydropower capacity in Ireland to 523,684kw. 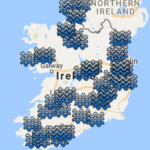 There is an excellent map of hydropower stations here.

In Ireland hydro-stations effectively produce an uninterrupted dispatchable supply of renewable electricity. The relatively consistent rainfall means that there is rarely an interruption or diminishment of power to reservoir fed hydropower station, although smaller river stations can suffer from interruptions when the river course drops below certain levels.

People have used biomass fuel for millennia burning wood, reeds and other materials. Depending on their design and feedstock types, biomass generating stations can be either dispatchable or baseload. A bio-methane producing anaerobic digester would be dispatchable, a wood-fired thermal biogas plant would not.

Battery systems are improving at a rapid pace and can already provide dispatchable power on a micro-producer level. It is likely that this technology will increase in scale and distribution and so become an integral part of the means by which intermittent energy is stored and distributed rapidly when needed. As was mentioned above, there are now combinations of super-capacitors with batteries that can provide almost instantaneous dispatch of electricity which is generated from renewable sources.

There are other possibilities for energy storage which involve using electrical energy when it generated in abundance (i.e. when its sunny and/or windy) to create a gas which can then be used to generate electricity on demand. Compressed Air,  Liquid Air, Hydrogen and Ammonia technologies are all being up-scaled for this purpose.

These are a means of controlling the levels of electricity dispatched onto the grid by networking large consumers of electricity in such a way as to control their levels of use or generation. Most large consumers of electricity (factories, institutes of education, hospitals, and larger public buildings) also need back-up generation capacity to be used in cases of emergency. This means that their consumption of power, if it can be controlled centrally, can reduce the need for power to be dispatched to the grid, or increase the availability of power should they be requested to start up their backup generators. This Demand Side Management may become a critical intermediate step in the integration of renewables into the system.