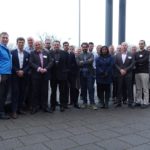 The aim of the project is to develop three locations that each use different Renewable Energy source technologies ( Wind, Solar, Anaerobic Digestion ) for the production of hydrogen.
The results from the three pilot plants in :
1. Saarland, Germany
2. Rosen, France
3. Stornaway, Scotland
Will be merged at the end of the Three years and form an online Decision Support Tool ( DST ) that will provide communities across the North West region of Europe with a road-map to make informed decisions concerning the use of Hydrogen in a wide set of applications locally ranging from transportation vehicles to heating usage etc.
While in the historic city of Saarland Cormac ( Walsh ) was shown an existing Hydrogen refueling station which is part of an network of 50 stations currently ( 2017 ) in Germany. The plan is for the country to have 100 by the end of 2018 and close to 400 stations by 2020 – see attached photos.
The Keynote Speaker was : Axel Tucker, Department Head of Hydrogen and Fuel Cells, BMW Group.
With revenues of 9.67 billion euros in 2016 and 124,729 employees they have long-term thinking when it comes to Enviromental issues and this has prompted them into conducting intensive research and development in the area of fuel cells and emission free vehicles. The first BMW production model is expected in 2021.
Members of the GenComm team were treated to drives in their latest research 5 series Hydrogen vehicle, all those who availed were highly impressed.