Ireland can be the ‘Green Norway’ of the 21st Century

There is no practical way other than offshore generated H2 to replace the fossil fuels in our energy system; it is less a matter of if H2, it is a matter of how.

Ireland faces an uncertain future: international tax regulations are to change affecting our corporate tax take, Covid 19 has transformed how we live and work, Brexit creates challenging uncertainties for trade, and climate change will transform our world.

There is however an opportunity emerging that will give Ireland control over its destiny creating long-term jobs, a guaranteed tax-revenue stream, and independence in the most critical arena of our economy: energy.

A consortium, led by a community energy co-operative in SW Ireland, says that it has the solution to this opportunity: offshore hydrogen production for export. 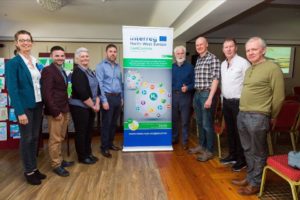 According to Colum O’Connell of the Valentia Island Energy Co-operative, Ireland has the greatest energy resource in the world today. Off our coasts there is enough free renewable energy to power ourselves and much of Europe. The East coast is ideal for offshore electricity generation plugged into the grids of Ireland and the UK. The weaker electricity grid and deeper offshore waters of the West of Ireland require a different solution. Using floating platform wind turbines and hydrogen energy storage we can capture this energy and replace fossil fuels used in heating and transport.

The Energy Co-operative say they have identified a clear path to achieving this game-changing move in global decarbonisation which puts Ireland and its West Coast communities at the heart of this transition to true sustainability.

Colum O Connell said: “Valentia is in the process of applying for UNESCO World Heritage Status, ensuring its legacy in global communications is recognised into the future, for the part it played in the Transatlantic Cable story. Up until 1966 Valentia was a hub for global communication. The opportunity to produce green hydrogen in the water off Valentia, will mean Valentia can once again become a global hub in the future, but this time in sustainable energy. Innovation is alive and well in Valentia.”

Cormac Walsh, Chief Executive of Energy Co-Ops Ireland said: “ECI are working with five Island Communities ( Valentia, Achill, Aranmore, Aran and Rathlin), all of whom are interested in helping develop Off Shore wind to Hydrogen production.”

The worldwide market for renewably generated Hydrogen is predicted to grow exponentially by 2050. This growth is supported by state and EU policy. We are at a point where offshore Hydrogen production for export is technically feasible and is creating a paradigm shift in the decarbonisation of the world’s energy requirements.

It is now widely accepted that there is an achievable goal of rolling out more than 30GW of floating wind generation twinned with Hydrogen electrolysers off the West Coast of Ireland. With the right policy support and community participation and acceptance, this is achievable over the next 15-20 years.

We’ve three choices: we can lose out to our neighbours and continue to be importers of other nations fuel, we can sell our own resources to multinational fuel companies like BP and Shell (again), or we can own, manage, and profit from the sustainable transformation of the world’s economy and environment. No state could contemplate choosing anything but the latter.

Paul Mc Cormack,  Programme Manager on the Belfast Metropolitan College led European renewables project GenComm, said: “Renewable energy sources continue to increase their share of installed capacity worldwide. However the rate of adoption is not sufficient to meet the challenges of climate change.  In order for Ireland to reach net zero we must have a fundamental change to bring about meaningful action to reach this target. This change can be achieved by harnessing our natural wind resources offshore. Their integration, in conjunction with increased energy efficiency and other low-carbon technologies, presents Ireland with the best opportunity to achieve energy sustainability.”

Valentia Island Energy Co-operative say they have built a broad and strong coalition made up of precisely the actors needed to achieve this goal. It includes Hydrogen experts, Third Level Institutions, technology providers, as well as a direct path to finance and markets, and at its heart, a community which is informed and eager to participate.

James Carton Assistant Professor Dublin City University, “What Valentia offers Ireland is a glimpse of a potential future energy scenario; a society where communities are not just customers, but energy citizens, demanding renewables, clean energy vectors and even becoming ‘prosumers’, with energy democracy at its heart; an Irish ENERGIEWENDE a “cas-u fuinnimh”…!” (ENERGIEWENDE, meaning “energy transition” is a 1970’s grassroots movement that has made Germany a leader in wind & solar deployment.)

Dr Rory Monaghan from NUIG Galway Hydrogen Supply Chains said: “”As countries in Europe’s industrial core, including France, Germany and the Netherlands, launch national hydrogen strategies, they all face a common question: “who will supply cost-effective green renewable hydrogen at scale?”. With our enormous renewable energy resources, Ireland has the opportunity to be Europe’s preeminent green hydrogen supplier. Now is the time to plan for this.”

Meanwhile the positive renewables news for Ireland continues unabated with Joe Scott, CEO of the Clean Power Hydrogen Group affirming: “CPH2 will this year be setting up manufacturing plants in ROI and NI to produce our Membrane Free Electrolysers. Projected jobs 1500-2000 directly employed and 2000-3000 jobs in sub-contracting over the next five-six years.”

This website uses cookies to improve your experience while you navigate through the website. Out of these, the cookies that are categorized as necessary are stored on your browser as they are essential for the working of basic functionalities of the website. We also use third-party cookies that help us analyze and understand how you use this website. These cookies will be stored in your browser only with your consent. You also have the option to opt-out of these cookies. But opting out of some of these cookies may affect your browsing experience.
Necessary Always Enabled

Performance cookies are used to understand and analyze the key performance indexes of the website which helps in delivering a better user experience for the visitors.

Analytical cookies are used to understand how visitors interact with the website. These cookies help provide information on metrics the number of visitors, bounce rate, traffic source, etc.

Advertisement cookies are used to provide visitors with relevant ads and marketing campaigns. These cookies track visitors across websites and collect information to provide customized ads.

Other uncategorized cookies are those that are being analyzed and have not been classified into a category as yet.