The meeting in the Belvedere Hotel in Dublin last night was a success, thanks to Cormac’s organizational skills and chair-personship.

As well as our ECI presentations from Pat and Lugh, we heard from Dara and Mairtin about the  new energy co-op they hope to be set up in the Aran Islands, Co. Galway. We also had a great contribution  from Richard Behal whose proposed refurbishment of the Flesk Mills hydro-system has the potential to become a 21st century flagship for renewables renewal as it was initially a flagship of hydro potential when it was established in the 19th Century as the generating system for the first municipal electric lighting system in Ireland. 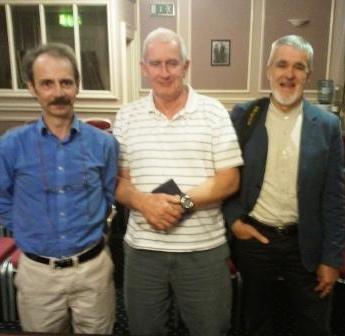 We also heard from MPower (formally MEGA) about their proposals to create the means by which micro producers can get their energy to market for the best possible return. The cluster-grid system that is being developed when it is rolled out later this year could become critical to the viability of small producers plans. We at energy co-ops are delighted to have a close association with MPower and look forward to working with them in the future.

We were also pleased to hear an encouraging contribution from the floor by John Fitzgerald of Irish Co-op Development Society who made reference to the serendipity of our having chosen the Michael Collins Room as our venue: Collins, as the new Irish State’s Minister for Finance, was a firm proponent of the Co-operative model as one of the best means of stimulating economic growth in the new State.

Collins clearly hoped to be able to replicate Isaac Butt’s 1890’s acheivement in setting up many hundreds of successful agricultural co-ops by promoting manufacturing and technology co-ops in the 1920’s. Unfortunately, this did not come about. However, as all of us in the renewables sector know, the potential of really powerful vision is sometimes not realised for some time. Remember that the ESB was experimenting with wind turbines in Donegal as far back as in the 1950’s.

Finally, well deserving of praise, the staff of the venue were fantastic: professional, helpful and above all friendly.