Minister Alex White, TD, praising the renewable energy co-op on the Aran Islands described how there is a case to be made that the Islands could serve as an example of how the country as a whole could benefit from the transition to low carbon economy. 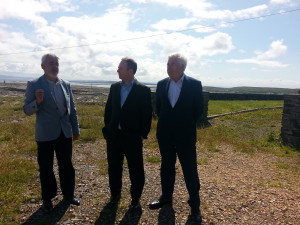 Visiting the Islands at the invitation of Energy Co-operatives Ireland and Comharchumann Fuinneamh Oileáin Árainn, the Minister said the while the White Paper to be published this Autumn would be able to prescribe every aspect of government policy in the sector, it would out community involvement at the heart of the transition process. This may be because of the strength of the work done by the community energy network in the past year.

There are now 5 renewable energy co-ops in Ireland with more in prospect. Energy Co-ops Ireland as the federation body of RESCOOPs in Ireland is bringing these diverse groups together as a powerful force which seeks to inform government policy and industry practices with some considerable success.

A key element in this work is the setting of ambitious but realistic targets. In this Fuinneamh has acted as a workable example for other co-ops to follow.

From its establishment the co-op on the Aran Islands has had as it stated goal the achievement of total energy independence by 2022.This would be as a result of the following measures:

Progress has been made on each of these fronts:

There have been extensive energy conservation retrofits carried out on the Island with the support of the SEAI’s BEC scheme. There are more works in the pipeline and there is every likelihood that every building on the three islands will be significantly improved by 2020.

The SEAI have concluded a study on the islands which demonstrates the practicability of converting the transport stock to EVs, and the results of this study were presented by Graham Brennan (SEAI). The Co-op members themselves have also identified the value of EVs to the transition and have purchased three Renault EVs with the expectation that more will follow.

The third step in the process towards energy neutrality will be the installation of renewable generation on the Islands, with the most likely option wind generation, though the siting of the turbine(s) is a sensitive issue and is being thoroughly investigated by the Co-op with a view to getting maximum community buy-in.

The real value of the work on the co-op is that it represents a microcosm of the country as a whole. Indeed Brian Motherway in his contribution to the ECI-Fuinneamh information session stated that the SEAI is delighted to be able to use the islands as an exemplar for other communities.

Cormac Walsh of ECI said that Fuinneamh represents a strong case-study of what is possible in our dealings with new co-operatives, and that it has set the standard of community action through renewable energy opportunities.