Tipperary shows that Irish PV is coming out of the shadows 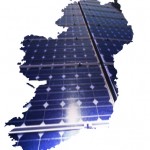 The installation of 800 PV panels on nine public buildings throughout in the County including  fire stations, libraries, civic offices and a leisure centre has raised the total PV output in the Republic by some 44%.

The conventional wisdom on RE’s in Ireland has been that there is an established hierarchy in technologies here: Wind is  king, Biomass and Storage hopeful pretenders; Wave and Tidal may one day vie with one another to take crown, but Irish PV is destined forever to languish in the shadows.

This table from Eirgrid showing renewable energy installations in Ireland North and South demonstrates the case:

This is largely as a result of two perceptions about PV: one erroneous, one out of date. Ireland is not known for its sunshine. Many of us would perceive the country as lurking beneath the grey gloom of  leaden skies. Many of us would be wrong. 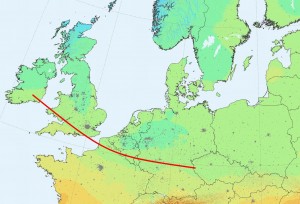 In solar radiation terms, Ireland is a country of two halves: a southern and eastern are that is dry and enjoys solar radiation levels akin to Northern Bavaria and a Western and Northern zone that is darker but windier. Bavarian RE is predominantly PV, so why can’t the same be said for Southern and Eastern Ireland?

There are two main reasons for this, both related to prices.

Wind in Ireland enjoys its lofty position in the hierarchy of RE technologies because large parts of Ireland are indeed very windy. The cost per kW for wind generated electricity is very low here. Thus successive governments have encouraged wind. Developers followed government policy and built out a lot of capacity in wind. This explains why there is a plethora of wind energy developments in Ireland, particularly on the west coast where wind is strong and sparsely populated open land is abundant. PV didn’t develop in Ireland because not only was their a misconceived prejudice about it’s viability, but there was a rival cheaper, rich resource of power that could be tapped.

However, wind energy offers its greatest potential where the population is low. There’s plenty of power on the western hills, but there’s not so much demand for power there. What electricity is generated must be distributed across the grid to the large energy demand locations: the big urban areas of the Eastern and Southern regions, requiring plenty of pylons. 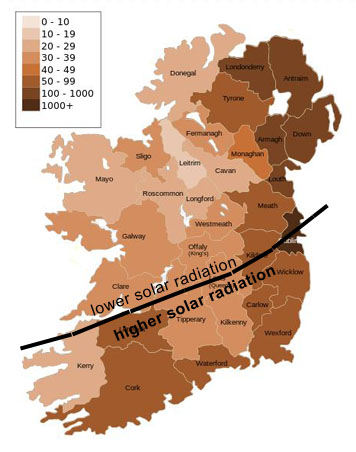 The Solar Radiation resource in Ireland however coincides with the densely populated industrially power hungry areas. So with PV it should be possible to generate large volumes of power close to where demand is high (though we’ll still need a modern, upgraded grid to deal with the electricity generated). However, why hasn’t the market, in the absence of pro-wind policy from the State, spotted the opportunity to develop PV here on a par with Bavaria?

The reason for this is almost certainly due to the historic economics of PV: it’s been an expensive technology to install in Ireland relative to the amount of power it can generate per meter square of PV Cells. However, developments in that economics have led to a shift in the balance sheet in favour of Irish PV.

The German government, as a result of its policy decision to phase out a reliance on nuclear energy, heavily subsidized PV technology. In effect the price of electricity to the consumer was raised to fund feed in tariffs and other supports to RE”s. The net result was a boom in PV technology development and deployment leading to a rapid drop in the cost of PV worldwide (the engagement of Chinese manufacturers in the PV market was an important contributor to this price fall).

These policy and  market factors have brought about a situation where PV installations are at a price point where they have become economically viable in Ireland, and, here’s the big point, this is without any state subsidy at all.

Market commentators identify a 9 cent price per kWh for PV over the lifetime of the installation. This compares to a 19 cent market cost for grid supply to many customers. A medium scale energy user can now achieve excellent payback for an  installation of 30 kW PV installation where they are able to replace grid electricity with auto-production. To achieve this, scaling and energy storage solutions need to be a key component in the installation. This is effectively what is demonstrated in the Tipperary example where the energy use profiles were such that surplus PV  energy can be stored as heat.

To demonstrate how the economics of a medium scale PV installation stack up, let’s do a bit of desktop modelling.

In 2015 a PV array installed in Ireland is expected to cost approximately €1,495 per kW. An installation in County Wexford, at a sample location (co-ordinates 52°28’58” North, 6°35’30” West, Elevation: 28 m ) will produce 953 kWh/y per kW. A correctly sized system whereby energy production is matched to demand will produce savings of approximately €170/y w here the grid price is €0.18/kWh including taxes and related charges. This will result in a payback period of 8.8 years and an ROI of €1,393 (5.5%/yr) if electricity inflation is 2% annually. With 0% inflation ROI is €1,097 (4.4%/yr). For a user who could avail of tax incentives this represents an excellent investment opportunity. A community enterprise which could leverage other grants and/or incentives would similarly benefit from taking a very close look at PV.

Germany has effectively subsidized the PV market for the rest of Europe, bringing down the price of arrays to the extent that they are economically viable almost everywhere.  Any push from the government here at all in the form of tax incentives or payments for production would energize the market for this technology: a technology that works best in the energy hungry Southern and Eastern regions, that has a much less obtrusive environmental footprint than wind, and whose diurnal productivity complements very effectively the nocturnal generation bias of wind.

It’s time for PV to step into the policy spotlight